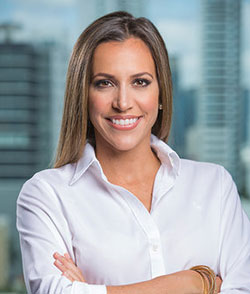 Ana Maria Vallarino is a member of the Board of Directors of Grupo VerdeAzul (GVA), VerdeAzul Hotels, and several GVA housing projects. She leads the execution of strategic projects for the group and she is the President of VerdeAzul Foundation, GVA’s corporate responsibility branch.

In 2004, she began her professional experience as the event coordinator for Grupo Pompa, Panama’s leading company in the organization, coordination, and decoration of corporate and social events.

In 2008, she joined GVA as Project Manager in charge of special and timely projects for VerdeAzul Hotels, and in 2010, she was promoted as Sales & Marketing Vice-President of Desarrollo Turistico Buenaventura, which handled the development and sales for Buenaventura Resort.

With the incorporation of new projects in Panama City and along the coastline of the Pacific Ocean, VerdeAzul Properties was founded in 2013 and she was appointed as its General Manager, overseeing the sales, marketing, and development of 18 residential and commercial projects.

Until 2020, she was the Vice President of Real Estate for GVA, managing several projects in Panama City and the Pacific coast areas of Panama.

She has co-founded five companies and currently co-owns high-end resort and beachwear boutiques, a prominent creative agency, and the largest digital signage ad network in Panama.

She recently joined as a member of the National Council for Gender Equality. Since 2019 she is part of the Board of Directors of Sumarse – Pacto Global Panamá. She also is an active promoter of the preservation of the cultural heritage of Panama, through the Mua Mua Foundation.

She was recently appointed as Executive Director of the #TodoPanamá movement.

Ana Maria obtained her Bachelor of Arts degree, with a specialization in Sociology, from the University of Virginia in the United States in 2004.

Go back to all profiles