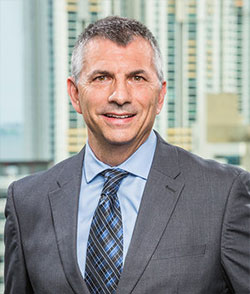 Glenn Simon is a leader with more than 25 years of professional experience in the hotel world and awarded for exceeding and fulfilling his goals. He has extensive experience in opening hotels and changing brands, exercising leadership positions. He currently serves as General Manager of Wyndham Panama Albrook Mall and much of his success attributes it to his leadership style based on respect for others and MBWA (abbreviations in English meaning administration by walking in the areas).

He previously held positions as General Manager in Hotels of brands such as Hilton, Marriott and Starwood in different countries. His previous experiences include hotels such as the Marriott Tegucigalpa, Honduras (2003-2006) and JW Marriott in Quito, Ecuador (2007-2008); in the United States the Sacramento Marriott Rancho Cordova (2008-2009), Sheraton Gateway SFO, Hilton San Francisco Airport (2009-2010) and Hilton Charlotte Center City (2010). Panama, Wyndham Panama Albrook Mall since its opening in 2013 to the present.

Go back to all profiles